Sometimes I help a little…

Thanks to some helpful comments on my previous blog post (@BostonTea84 and matthewcarberryblog), I have done a bit more hunting and pecking on the question of gun ownership statistics.

In this post I want to look at a study matthewcarberryblog pointed me to, published in 1995 in Public Health Reports. 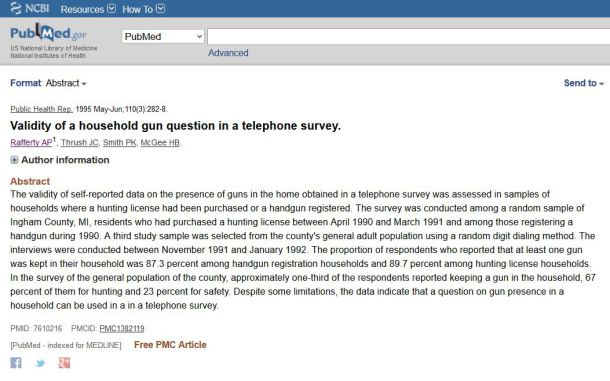 The study attempted to assess the validity of a household gun ownership survey question by calling up a sample of households in Ingham County, Michigan who were presumed to have a gun because they either purchased a hunting license or registered a handgun in 1990/1991.  For comparison the researchers also conducted a telephone survey with a random sample of the entire county population. Surveys were conducted in November 1991 and January 1992.

Interesting findings of note, all of which point to the extent of systematic under-reporting of gun ownership in surveys, are:

(1) Systematic Non-Participation in Surveys by Gun…